I have question form Blog reader:

“Let’s say you have 3 tasks, A, B, and C. And they are scheduled to happen in sequence one after the other. You set the baseline on these three tasks and then start tracking the schedule. Assuming task A had a delayed start and finished 3 or 4 days behind schedule.
Then you decide to add another task D as a successor to C (after the change has been approved). For that purpose, we need to add task D to the original baseline.
I selected Task D, Project->Set Baseline->For Selected Tasks->To All Summary Tasks.
It did add Task D to the baseline but not to the original baseline. It creates a new baseline with a delayed start for Task D (due to the delay in the start and finish of Task A).
I’m thinking this is because the predecessor on Task D was set after the delay.
Since the change was approved, it should now become part of the original baseline.
Can you please advise on how to do this?”

First I will create the scenario using MS PROJECT 2019:

Now, I’m going to save the Baseline:

OK! Now I will put Task A as finished but with start Date three days later:

After that let’s look at Variance table: 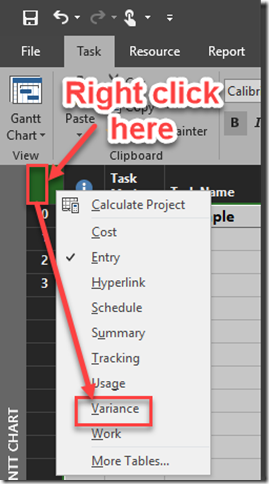 I will now save the Baseline for just this Task:

and I will get this:

As you can see, there in no difference from Actual and Baseline for Task D. But my reader  wants to make a scenario like this, and save the Baseline:

What he wants to do is to add additional Task (change) to Original plan, before Task progress was in MS PROJECT. And that is impossible just by adding the Task D. what he should do? He should first undo progress to get the picture like above and then add the Task. Then he should save the Baseline, and THEN make a progress for the Task A like I did.

And this is real life case. If you make a progress (like I did for Task A), than it doesn’t make a sense to put Task D to the original plan, because it is obsolete anyway.

Location: Zagreb, Croatia Occupation: Project Manager Interests: Project Management and MS PROJECT He was born in Zagreb, Croatia at 1963. After completing his college he started working on projects in different business areas (banking, manufacturing, automotive industry, distribution, oil companies, etc.) developing and implementing ERP systems into different companies. He has got a lot of experience working with people in different business processes and also possesses great knowledge in information technologies and financial services. Today he works as a business consultant, adn Project Manager in PERPETUUM MOBILE d.o.o. Zagreb. He is a regular lecturer for Project Management in MS Innovation Center in Varaždin, Logosoft Sarajevo in Bosnia and Herzegovina and SEAVUS GROUP in Skopje Macedonia. He was named the best lecturer of WINDAYS 2008 while his lecture was also voted as the best. In addition, he was in TOP 10 lecturers at the MS SINERGY 2009 and MS VISIA 2009, 2010. Shares first place as the best lecturer of KulenDays 2009 and 2010 and PMI Conference 2009 in Zagreb. He is also a regular lecturer in the MS Community. He is a Certified Accountant and a PMP (Project Manager Professional) and a PMI-RMP (Risk Manager Professional), MCP, MCT, and Microsoft Certified Technical Specialist - Microsoft Project 2010. From 01.01.2012 awarded with MVP (Microsoft Most Valuable Proffesional - Microsoft Project)!
View all posts by Nenad Trajkovski →
This entry was posted in MS PROJECT 2019 and tagged MS PROJECT - Baseline. Bookmark the permalink.