I received a message from one of my reader. It states:

I have been reading through your posts but could not really find back an answer on an problem I’m puzzled with.
Let’s say I have a project for performing a testdrive on a prototype car. The testdrive project itself is made up by a series of tasks. The tasks need to be performed by a testdriver (work resource) but he also needs the car to do it. So the testdriver is one resource, the car is the other. I both need them to perform the task, assigning the car resource to the same tasks as the testdriver should not reduce the time it takes to perform the task or should not reduce the workload of the testdriver.
Also another difficulty, the car is not available constantly (it is used by other divisions of the company) so I would like to auto schedule the tasks according to the availability of the car.
Lets say the project takes 10 days in total, but the car is only available 2 days in the first week, 3 days in the second week and 5 days one moth later.

Is there a way to do this ?
Thank you for your valuable response.”

OK! Let me fix this issue.

First let me do the setup.

I will add three Tasks:

and then two Resources: 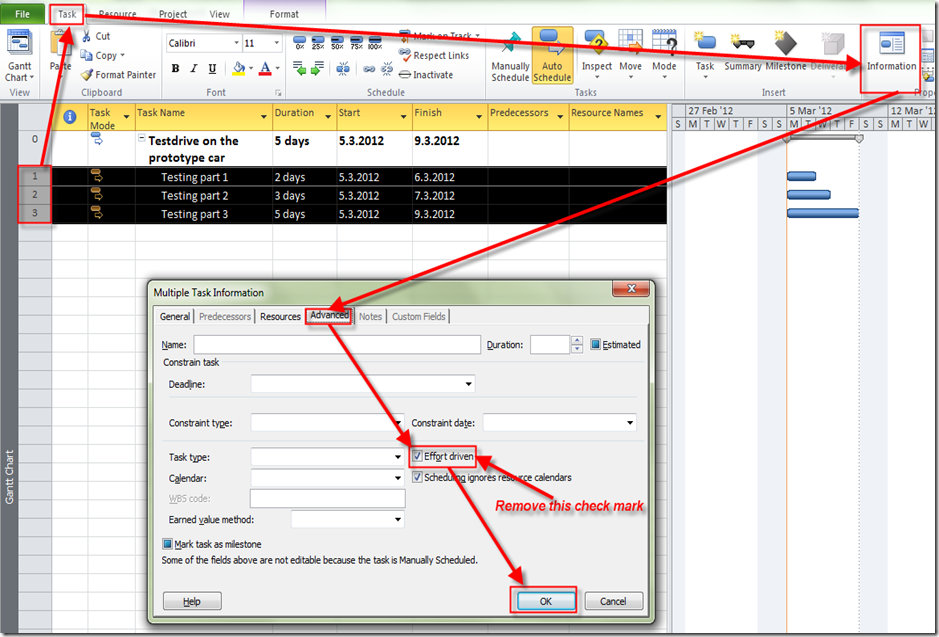 I will make a brand new Calendar and I will call it Car Testing:

Now I will fix working days in a way that I will make exceptions:

Now I will assign Resources to my Tasks:

and I will make a Schedule for my project:

Now I will assign my Car Testing Calendar to all of my Tasks:

As you can see, I got what I wanted. Task 1 will be performed at first week, Task 2 in second week, and Task 3 in next month!

And since my Task are not effort driven, time and work are not reduced:

You should keep in mind that if a Task is effort driven but you assign both resources at once, duration and work remains the same. But if you first add one Resource to the Task, and after some time you add another resource then duration and/or work will be shortened, which depends of your task type (fixed units, fixed work or fixed duration), and you can read about this in my previous posts!

I will make an exception for the Car Resource since it is available for the testing to the Test Driver Resource in these particular days! 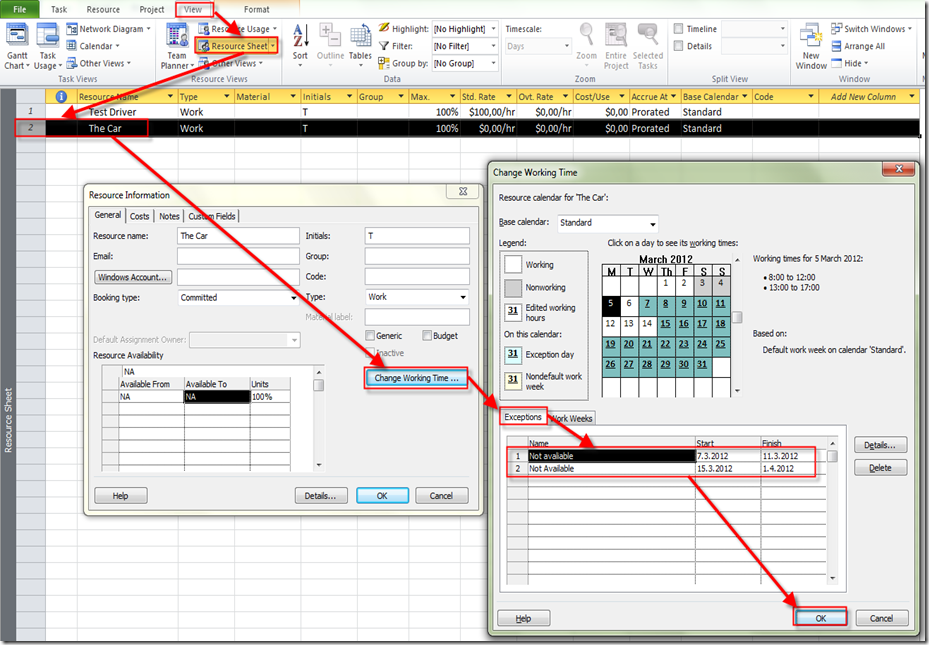 Now I will add those Resources to the Task 1: 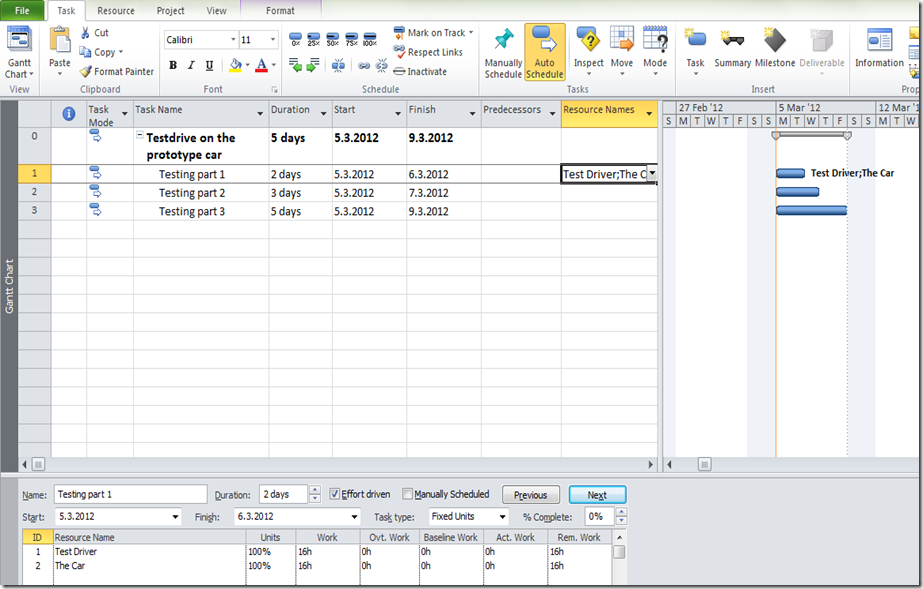 Now I will add the same Resources to the Task 2:

Now I will immediately use Task Inspector. I will right-click on the Task2 and then:

Finally, I will add Resources to the Task 3, and I will get:

You can see that I have same problem as I had with second Task. I will apply the Task inspector as I did it before, and I will get:

Location: Zagreb, Croatia Occupation: Project Manager Interests: Project Management and MS PROJECT He was born in Zagreb, Croatia at 1963. After completing his college he started working on projects in different business areas (banking, manufacturing, automotive industry, distribution, oil companies, etc.) developing and implementing ERP systems into different companies. He has got a lot of experience working with people in different business processes and also possesses great knowledge in information technologies and financial services. Today he works as a business consultant, adn Project Manager in PERPETUUM MOBILE d.o.o. Zagreb. He is a regular lecturer for Project Management in MS Innovation Center in Varaždin, Logosoft Sarajevo in Bosnia and Herzegovina and SEAVUS GROUP in Skopje Macedonia. He was named the best lecturer of WINDAYS 2008 while his lecture was also voted as the best. In addition, he was in TOP 10 lecturers at the MS SINERGY 2009 and MS VISIA 2009, 2010. Shares first place as the best lecturer of KulenDays 2009 and 2010 and PMI Conference 2009 in Zagreb. He is also a regular lecturer in the MS Community. He is a Certified Accountant and a PMP (Project Manager Professional) and a PMI-RMP (Risk Manager Professional), MCP, MCT, and Microsoft Certified Technical Specialist - Microsoft Project 2010. From 01.01.2012 awarded with MVP (Microsoft Most Valuable Proffesional - Microsoft Project)!
View all posts by Nenad Trajkovski →
This entry was posted in MICROSOFT PROJECT, Microsoft PRoject 2010, MS PROJECT 2010, PMI, PRoject Management and tagged Microsoft Project 2010, Microsoft Project 2010 - RESOURCES, MS PROJECT 2010 - assigning Resources, PMI, Project Management. Bookmark the permalink.