Over allocation not shown in MS PROJECT 2016 with Windows 10–Bug or not?

Posted on August 8, 2017 by Nenad Trajkovski

My blog reader has a problem. He explained it step by step, and I will answer at it in the same way.

Project in certain instances doesn’t flag  over allocated resources.
For example, I created a resource John and assigned him to the project at 50% (Max Units):

Then I assigned this resource to a task at 51% that exceeds its max units of 50%. In this case Project was supposed to flag John as over allocated resource, but it did not do that. The only place where Project show over allocation is in in the time phased portion of the  Resource Usage view: 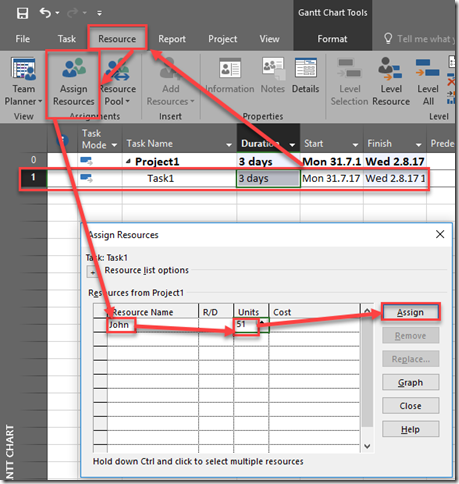 Is it a BUG? No! Is it an over allocation? It depends.

In this particular case, this is not over allocation because of setup: 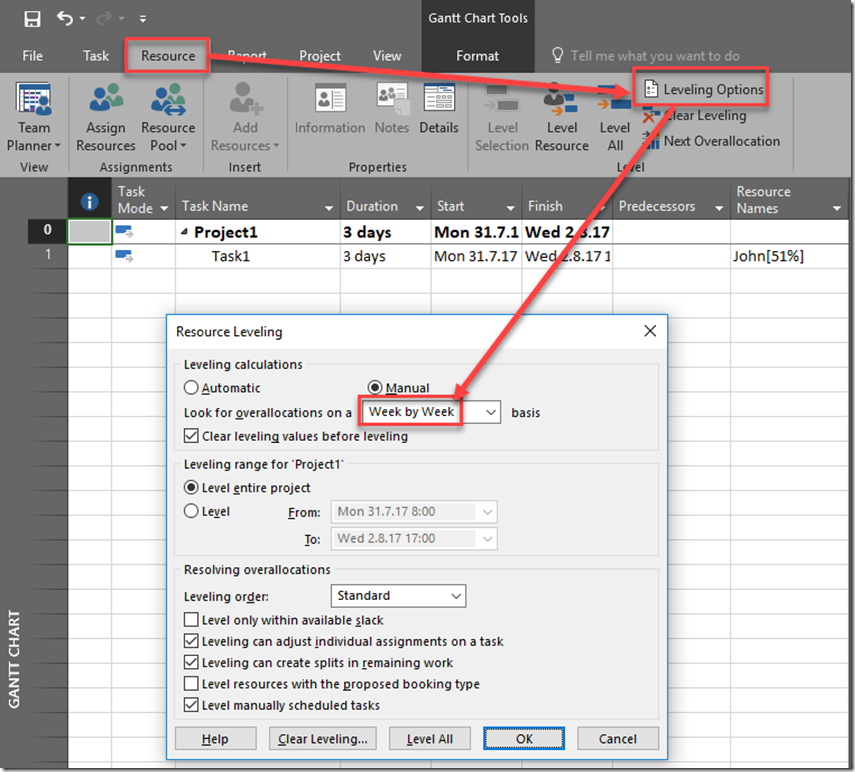 John is assigned to the Task with 51%. It means that he will work 51% of 8 hours = 4,08 hour per day, and he is supposed to work 4 hours per day MAX, because of his 50% availability. So yes, John is over allocated per day (as you can see in Resource Usage View), but since Levelling Options is setup to Week by Week (or maybe Month by Month) generally John is not over allocated. WHY? Because John should work max. 20 hours per week (5 days * 8 hours per day * 50% = 20 hours). Task1 has 3 days duration, and John is assigned with 51% which means that he will work 3 * 4,08 = 12,24 hours in particular week, which is less than 20 hours, so he is NOT over allocated. If I put Day by Day in field mentioned above I will get:

Now John IS over allocated because he is supposed to work no more than 4 hours per day (no matter how many hours he will spend in one week).

When I assign John at his Max. Units  (50%) or less to both tasks Task 1 and Tasks 2  that have  FS relationship, Project behaves as expected as no over allocation for John is detected.

But when I assign John to both tasks as above, but at any capacity  higher than his Max. Units, e.g. at 51%, Project marks John as over allocated although he is not as the tasks don’t run concurrently.

On the other hand when I add a lag to Task 1,  Project behaves as expected and doesn’t show over allocation with the strange exception  in the time phased portion of the Resource Usage View where the work is displayed in red as being over allocated:

To conclude, before you want to deal with over allocation, be aware that you set it up in a right way (Day by day, Month by Month and so on).

Location: Zagreb, Croatia Occupation: Project Manager Interests: Project Management and MS PROJECT He was born in Zagreb, Croatia at 1963. After completing his college he started working on projects in different business areas (banking, manufacturing, automotive industry, distribution, oil companies, etc.) developing and implementing ERP systems into different companies. He has got a lot of experience working with people in different business processes and also possesses great knowledge in information technologies and financial services. Today he works as a business consultant, adn Project Manager in PERPETUUM MOBILE d.o.o. Zagreb. He is a regular lecturer for Project Management in MS Innovation Center in Varaždin, Logosoft Sarajevo in Bosnia and Herzegovina and SEAVUS GROUP in Skopje Macedonia. He was named the best lecturer of WINDAYS 2008 while his lecture was also voted as the best. In addition, he was in TOP 10 lecturers at the MS SINERGY 2009 and MS VISIA 2009, 2010. Shares first place as the best lecturer of KulenDays 2009 and 2010 and PMI Conference 2009 in Zagreb. He is also a regular lecturer in the MS Community. He is a Certified Accountant and a PMP (Project Manager Professional) and a PMI-RMP (Risk Manager Professional), MCP, MCT, and Microsoft Certified Technical Specialist - Microsoft Project 2010. From 01.01.2012 awarded with MVP (Microsoft Most Valuable Proffesional - Microsoft Project)!
View all posts by Nenad Trajkovski →
This entry was posted in MICROSOFT PROJECT, MS PROJECT 2016, PMI, PRoject Management and tagged Micorosft Project 2016, Micorosft Project 2016 - Resources, Micorosft Project 2016 - Schedule. Bookmark the permalink.

1 Response to Over allocation not shown in MS PROJECT 2016 with Windows 10–Bug or not?