I’ve got very specific question from one of my blog Reader, and I’m going to answer this step by step using MS PROJECT 2016

First, I created three tasks – Fixed Units, Fixed Work and Fixed Duration, Task1, Task2 and Task3 accordingly. Then I gave 5-day duration to each task and added a resource Bob to the project. I gave him a 100% of Assignments Units for each tasks (disregarding overallocation). Also Bob doesn’t work on Mondays (his calendar is modified accordingly).

OK, I will create tasks:

Now I’m going to create Bob as Resource, and his working time (without Mondays): 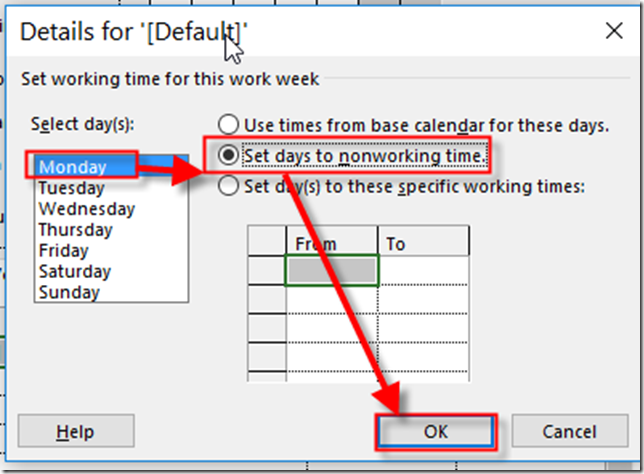 “Next, I assigned Bob at his maximum capacity to each task. Project did the calculations:
The Work For Task 1 (Fixed Units) and Task 2 (Fixed Work) was calculated as 40 hrs (W = D x U = 5d x 100%), but Task3 (Fixed Duration) got Work of 32 Hours while its Duration was fixed at 5 days and didn’t change. So on one hand Project when it calculated the Work for Task3 reduced its Duration by one day to account for Monday off (03/28/16) , that is, W = D x U= (5d-1d)*100%= 32 hrd of Work, but on the other hand it showed that Monday as a working day on Gantt chart while not showing in on Task Usage View. This is very confusing.”

Well it might be confusing but this is LOGICAL! Since we put 5 days duration in a FIXED DURATION TASK TYPE, it will have 5 days no matter of Resource availability. So, because Start date for the Task is 04.04.2016 (Monday), and Bob will not work at that Monday,  MS PROJECT will not move this task to end at Tuesday 12.04.2016. This is an easy example. But what if we have Mary as resource and she doesn’t work at Wednesday? Does it mean that Mary will works at Monday, Tuesday, Thursday, Friday and next Monday, and Bob will work at Tuesday, Wednesday, Thursday, Friday, and next Tuesday? So the Task will start at Monday, 04.04.2016, and end at Tuesday, 12.04.2016? NO! Because in that case duration will be 7 instead of 5 days! So, no matter of Resource availability, duration remains the same!

Now, my Blog reader has another problem:

“Now I change Task2 type from Fixed Work to Fixed Duration. Project recalculated Task2 components as follows:
Task2 Work was not changed (40 hours), but the Duration increased to 7 days which included both non-working Mondays, even though logically speaking the Duration of 5 day should have been changed for a Fixed Duration task. It’s also very confusing.”

and in Task usage View:

First, this task was fixed work, and it was calculated that for 5 days duration it will be 40 hours of work for Bob! And Start date was Tuesday, 05.04.2016, and End date was Tuesday, 12.04.2016. That was logical, because Bob doesn’t work at Mondays. But, after changing Task Type from fixed Work to Fixed Duration, calculation was made like this:

I hope that I helped with clarifying this odd situation.

Location: Zagreb, Croatia Occupation: Project Manager Interests: Project Management and MS PROJECT He was born in Zagreb, Croatia at 1963. After completing his college he started working on projects in different business areas (banking, manufacturing, automotive industry, distribution, oil companies, etc.) developing and implementing ERP systems into different companies. He has got a lot of experience working with people in different business processes and also possesses great knowledge in information technologies and financial services. Today he works as a business consultant, adn Project Manager in PERPETUUM MOBILE d.o.o. Zagreb. He is a regular lecturer for Project Management in MS Innovation Center in Varaždin, Logosoft Sarajevo in Bosnia and Herzegovina and SEAVUS GROUP in Skopje Macedonia. He was named the best lecturer of WINDAYS 2008 while his lecture was also voted as the best. In addition, he was in TOP 10 lecturers at the MS SINERGY 2009 and MS VISIA 2009, 2010. Shares first place as the best lecturer of KulenDays 2009 and 2010 and PMI Conference 2009 in Zagreb. He is also a regular lecturer in the MS Community. He is a Certified Accountant and a PMP (Project Manager Professional) and a PMI-RMP (Risk Manager Professional), MCP, MCT, and Microsoft Certified Technical Specialist - Microsoft Project 2010. From 01.01.2012 awarded with MVP (Microsoft Most Valuable Proffesional - Microsoft Project)!
View all posts by Nenad Trajkovski →
This entry was posted in MICROSOFT PROJECT, MS PROJECT 2010, MS PROJECT 2016, PMI, PRoject Management and tagged Micorosft Project 2016, Micorosft Project 2016 - Resources, Micorosft Project 2016 - Tasks. Bookmark the permalink.